This sanctuary consists of 52, square kilometers of land that was reserved in to help protect wildlife, most notably muskox. The wilderness of the Thelon makes for spectacular wildlife habitat, one of the main reasons I have chosen to highlight this river. As mentioned, it boasts a thriving muskox population, but it is also home to the Beverly caribou herd, grizzly bears, wolverine, moose, lynx, arctic fox, peregrine falcons, gyrfalcons, rough-legged hawks and bald eagles. With its white sand at the Thelon-Hanbury junction, 15 m high sand embankments and boulder beaches at the Thelon Bluffs and the Aleksektok Rapids, it truly is an area of spectacular beauty, one largely untouched by people.

The famous biologist Ernie Kuyt, who helped to save the whooping crane from extinction, was once stationed here. Although the canoeing season is relatively short, lasting weeks from late June to mid-August, the Thelon Heritage River offers a first-class paddling experience that is well known to pioneers of wilderness canoeing.

More than a hundred canoeists travel down the river each year. Some groups follow the Hanbury-to-Thelon route.

The first stretch on the Hanbury River is extremely arduous, as the spectacular waterfalls at Dickson Canyon and Helen Falls require strenuous portages. An alternate journey beginning on the upper Thelon River is equally demanding, with numerous rapids and an excruciating portage of several kilometres around the Thelon Canyon. The day journey downriver from the Hanbury-Thelon confluence to Baker Lake is less difficult. It has some fast water stretches, but it is generally free of portages.

As do the tall eskers overlooking the waterway, which also offer exceptional, mosquito-free hiking, with panoramic views over the seemingly endless tundra. The community of Baker Lake is the main access point to the river. The lakes on the lower Thelon are also accessible by canoe from the Dubawnt River system, but Dubawnt Lake is often frozen into July. Canoeists can arrange for a pickup at several locations along the Thelon waterway, either by floatplane or by powerboat arriving from Baker Lake.

For more information, check the Nunavut Parks website. We use cookies to improve functionality and performance. By clicking "OK" or by continuing to browse this site, you agree to the use of cookies. To find out more, visit the cookies section of our privacy policy. Thelon Heritage River. Migrating caribou that follow the waterway to calve north of Beverly Lake, sometimes swimming across the river in a kilometre-wide two thirds of a mile wide band; Nunavut's largest flock of greater Canada geese, located between Beverly and Aberdeen Lakes, plus one of the few inland colonies of lesser snow geese; Peregrine falcons, gyrfalcons and rough-legged hawks; Wolverines, arctic foxes and arctic wolves; A population of moose living along the upper reaches of the river; Barren land grizzly bears that prey on nesting geese and their eggs in the spring and summer; A mix of boreal and arctic fish species, including arctic char, grayling, humpback and round whitefish, cisco, lake chub, spoonhead and slimy sculpin, plus trophy-sized lake trout; A population of more than 2, muskoxen, usually seen in herds of animals, living between Warden's Grove and Lookout Point.

We landed on the patch of water straight ahead and pulled up to shore in the right hand turn with the sand beyond. It was a perfect landing!

It was bot ha good spot to land and an easy spot to unload the plane, all without getting our feet wet! Making sure that the canoes are secured tightly is the most important part of the loading.

The take off that left us alone for probably over kilometres. When the plane flies away and you are left with the silence and the solitude of The Barrens, it is a thing of pure beauty for me. It scares some people when they realize how alone they are, but for me, it jump starts my survival mode and makes me feel extremely alive.

Our first camp site on the Hanbury River. It was a nice spot, where we landed, the weather was fine. We decided to stay put and explore the area. Not only is there tons of sand along the rivers in the Barren Grounds, some of it takes strange shape and form, molded by the permafrost underneath.

Most Popular Posts In The Last 30 Days

This almost looked like a burial mound. Roman preparing a good bed of coals. We bought 4 huge steaks in Yellowknife that we roasted over the coals. I am amazed that none of us got a picture of them on the grill! A sandstone cliff and outcropping on the Hanbury River. Note the hundreds of old swallow nests and some new ones.

They have most probably been nesting here for thousands of years. We still looked very fresh that first day of paddling, on our way down to meet the Thelon River. Slightly left of center in the photograph, you can make out the old warden's cabin in Warden's Grove, on the left side of the Thelon a couple of kilometers below the Hanbury. Its strange. I have been in this spot twice before and never saw the cabin from the river.

This time around, it literally jumped out at me. Perhaps I had studied the maps closer this time and knew more precisely where to look. Anyway, it was kind of weird but nice to be able to spot it and visit it. I had expected the cabin to be just rubble, but it is still mainly standing, with part of its roof collapsed. Old saws and shovels were left behind.

It looks like the Warden's Grove stand of trees yield large enough logs for such construction. Walking back to the river we found lots of very fresh birch Boletes mushrooms that Wolodymyr is seen carrying in his right hand. Very edible and tasty. We fried them to accompany several of our meals. Our second night out on the Barrens was on this very fine beach. We had a wicked tail wind from the south all day. That gives you good speed but it is hard to control the canoe. The lake trout was not very big but just perfect for us. We fried it with fresh ginger. 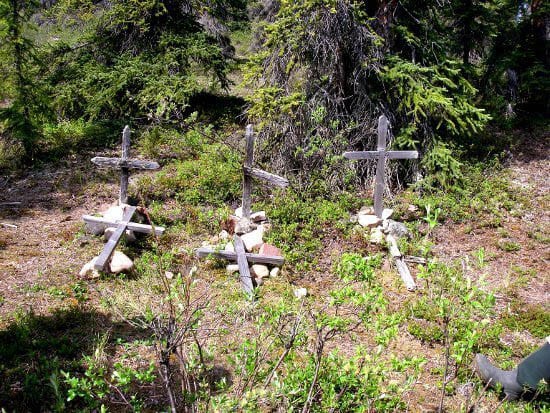 Interesting weather was all around us, nice but somewhat unsettled. I scampered up looking for a possible camp site. Nothing is set here. Every camp site is something you spot, you find, you figure out.

At some places you can tell that others had the same idea. But sometimes it is not obvious and not easy to find a decent spot and you have to settle. Fortunately, in August, you have many more options as the water levels are so much lower. This was the site where we had gotten hammered by a bad thunderstorm the afternoon before.

The place where God began

It was coming up behind us and we barely found this spot and put up our two tents before all hell broke loose. We ended up riding it out with all 4 of us in my tent. We estimated the winds at up to 90kph. I have never seen my Nunatak bend so much because of a wind. It was not the best spot, but someone had used it before. The gravel was really loose so we used large rocks over the tent pegs for the storm.

But it was a huge lesson to us. We had left our 2 canoe up on the beach but not tied, on the lee side of the spit of landed. They were completely sheltered from the wind. Had the winds been in a slightly different direction, the canoe would have been kilometres downstream. So the rule is, no matter what the weather looks like or what the terrain is, always tie up your canoes overnight.

Tie them to a tree, a bush, a rock, or a good peg, but tie them up. It does not take much for a wind to take them away. I really believe that a bug enclosure is a must. Its perfect for 4 people. You can eat in there, socialize, play card games or Scrabble, in the relative comfort away form the bugs.

My zippers were starting to go, so we had to nurse it along for the rest of the trip. It turned colder after the thunderstorm, and the wind shifted from the north, which was the general direction we were going. So a strong tail wind and a current turned into a strong head wind with a current. In this shot, Sarah is taking a nap in the canoe while we waited to see if the winds would die down. This particular section of the river had the winds coming straight at us. You can see the strength of the head winds by looking at the white caps in the middle of the river.